SOURCER FROM BEVERAGE INDUSTRY: In the fast-moving consumer packaged goods (CPG) market, packaging waste continues to be a growing concern for stakeholders and consumers alike. Given this challenge, brand owners are investing in collection and recycling systems to reduce this waste. Yet, some brands are taking a different approach by employing packaging materials that have a reduced long-term impact on the planet.

Paper- and corrugated-based cartons are offering beverage-makers an alternative designed to  support sustainability. An adopter of this movement is Holland, Mich.-based Boxed Water Is Better.

Since 2009, Boxed Water Is Better has been utilizing cartons that are 92% plant based. Founded by Benjamin Gott, the entrepreneur generated the idea to launch the company after witnessing tons of empty and plastic water bottles littering the grounds during a Lollapalooza concert. Gott eventually worked with dairy producers to obtain milk cartons that would store purified water. Since then, Boxed Water Is Better gained a partnership with Oslo, Norway-based Elopak to secure its boxed aseptic cartons. This alliance still stands today.

Rob Koenen, CEO of Boxed Water Is Better, recounts the significance of building this empire.

“We have the most sustainable carton,” Koenen says, while discussing the difference between boxed water packaging and regular packaged waters in this market. “Plastic is made from oil, and it’s not a renewable material. You can’t put oil back in the ground.”

The cartons are made out of trees in order to avoid certain materials. “We obviously are made from paper,” Koenen notes. “Ninety-two percent of our material is made out of paper. The cap itself is made from the waste of Nordic pine trees.”

The brand’s cartons also are forged from sugar canes and easily foldable while empty, he says.

The brand also expanded its reach through its April release of new flavor varieties: Lemon, Blackberry, Cucumber and Grapefruit. Koenen asserts that the additions can brighten the moods of its customers.

“Cucumber has more of a spa taste,” he says. “Lemon and Grapefruit are great in the morning to wake you up. And Blackberry is a great afternoon drink. Instead of having a piece of chocolate as a treat, this really does taste like a treat.”

The company also entered the mixers market with its Matcha and Relax mixer packs, which are available in 12 and 24 packets.

Recognizing the importance of trees to the environment, the brand also took initiatives to plant trees four years ago. A campaign was organized for its customers to capture pictures of boxes; as well as to post them onto social media platforms. This idea encouraged Boxed Water Is Better to sow vegetation.

“We have worked diligently for the last 10 years spreading awareness and education around plastic and aluminum pollution,” Koenen explains. “We have been focusing just to get the word out.”

Boxed Water Is Better connected with environmental nonprofit 1% for the Planet, which helped the brand to engage with the National Forest Foundation (NFF). Through this engagement and partnership, the packaged water brand has planted 1 million trees as part of its ongoing commitment to support the planet and sustainability efforts, it says.

Koenen is convinced that it’s the right gesture to do for this natural environment.

“Trees are the planet’s filtration system,” Koenen explains. “They provide a ton of oxygen to this planet in its lifetime. We’re aiming for a second million trees, which is remarkable. But even more importantly, we built a community on social media of people who love the planet and who have taken it to make something beautiful.”

Boxed Water Is Better’s next philanthropic goal is to clean 3,000 miles of beaches nationwide with the ministration of supermarkets, hotels and nonprofit organizations. To accomplish this mission, Boxed Water is Better is collaborating with the conservation nonprofit Ocean Blue project to clean up beaches and educate people about the devastating effects of beach pollution.

The company also is taking its mission to the skies. In May, Boxed Water Is Better announced that Alaska Airlines will begin to replace single-use plastic bottles in First Class with the company’s 92% plant-based cartons. This effectively removes 7.2 million plastic bottles a year ― equivalent to approximately 98,000 pounds of plastic, according to the company.

“I think it’s a real mission of kindness,” Koenen says. “To spread the mission out, we work with companies like AG Jeans, Kimpton Hotels, Toms Shoes and Alaska Airlines. All of these groups have decided to give up plastic in one way or another. Underneath it all, they want to do something better for the planet.” 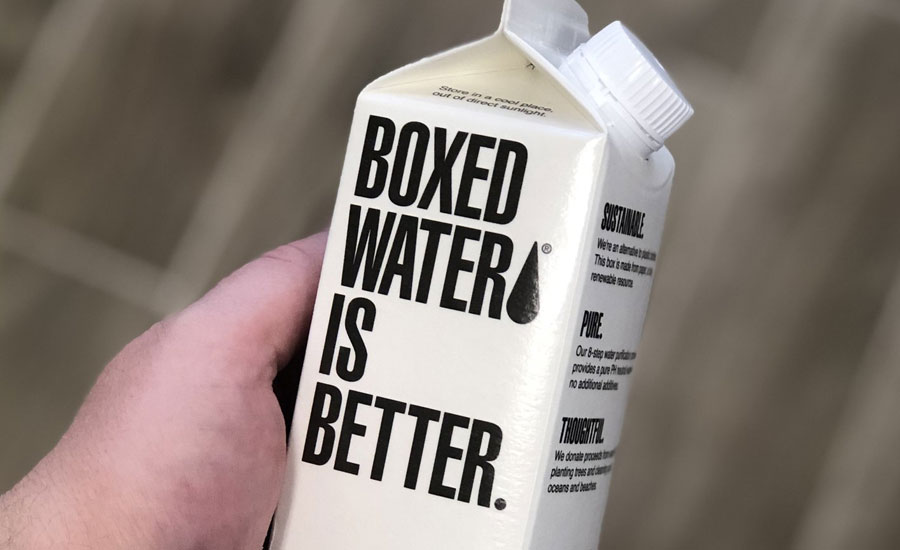 Newer What the Heck Is an Oktoberfest Beer?
Back to list
Older Anheuser-Busch to produce Stella Artois in US
close